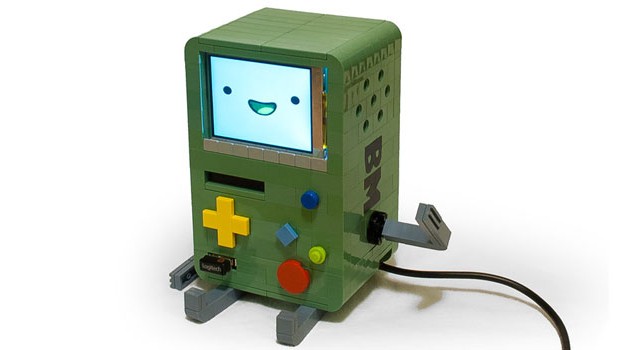 Being huge fans of what is easily the coolest animated show ever, Adventure Time, as soon as we saw this case build pop up in Google alerts we knew we had to feature it on the site – Michael Thomas’s Raspberry Pi powered BMO, built from Lego.

Just like the ‘real’ BMO, using the Raspberry Pi as the heart of this build means that Lego BMO can do just about anything – Play games, show videos, play music, and browse the web among much more.

“It can do pretty much anything you can think of… of course it cannot make toast or skateboard like the real BMO.” Says Michael on his Flickr page.

Michael designed this clever build to show off at BrickCon in Seattle, an annual convention for adult fans of Lego held in Seattle, where fans and builders can bring in and exhibit their Lego creations.

The build took Michael several weeks, half of which was occupied with sourcing the right parts to make BMO look just right, and then the rest involved whittling away at the creation in his spare time.

Michael’s Lego BMO will be on display at BrickCon this weekend, but if you’re like us and can’t make it (sometimes living on the other side of the planet has its drawbacks), you can check out this video of Lego BMO playing, of course, Adventure Time.