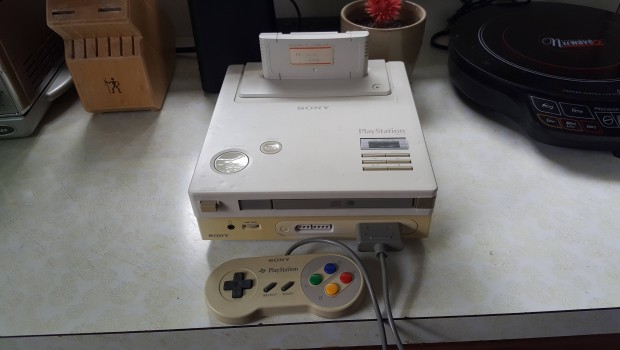 Did you ever think you’d see a Sony and a Nintendo logo on the same console? Well here it is in living proof.

Back in 1988 – when 16 bit consoles were the bleeding edge, the internet as we know it was just a twinkle in Tim Berners-Lee’s eye, and hair metal bands roamed the planet – there was no Playstation, no Xbox; just the bitter rivals Nintendo and Sega, duking it out for supremacy in the home console market.

Sony, who at the time had no stake at all in the video games market, were engaged by Nintendo to develop a CD-ROM add-on for their upcoming SNES console. This add-on would help them compete with the already established Sega Mega Drive (Genesis in the USA) and with Sega’s own upcoming CD Drive peripheral.

After 3 years of development Sony produced a mystical item that since fallen into the annals of urban legend and intflated school-yard tales – The Nintendo Playstation.

The Nintendo Playstation was a stand-alone console that accepted both SNES cartridges and CD-ROM discs, and was set to take the world by storm.

The project was revealed at the 1991 CES trade show, and with 200 prototypes created and ready for testing, Sony was reading to take its first steps into the video game market.

But then, suddenly… betrayal!

Blinded by their own hubris over the success of the SNES, Nintendo announced at the very same CES – Sony was being ditched as developer of the CD-Rom peripheral for the popular console. And in a further twist of the knife, the development deal was going to their bitter rivals – Philips.

Sony, who had never been particularly interested in the video games industry before this point, betrayed, bewildered, wondered what they would now do with three years worth of development on a video game console.

They say the best revenge is success, and Sony really took that to heart – the work they had done for Nintendo now became the basis of what would become the Sony Playstation.

Nintendo not only ballsed up their CD-ROM add-on dreams (Philips never even managed to develop them a CD peripheral, and instead made the terribly sucky CD-i console) they also created their own biggest rival in the video games industry.

So the fruits of the above tale of Woe – the 200 prototype units of the Nintendo Playstation – were thought to be lost to the ages, with most of them probably crushed or dumpstered. And while this makes them an interesting and rare piece of technology history for most people, for retro game collectors they are more valuable than gold.

And one of these golden eggs just showed up on reddit. User /u/analogueboy, in an epistle worthy of any ‘my uncle works at Nintendo’ schoolyard tale, announced to to the world that while going through his dad’s old junk, he found the prototype system in near perfect condition, aside from some authentic SNES yellowing on the plastic (which to be honest would just add more authenticity) around the controller ports.

More backstory began to unravel, both on reddit, and (due to the mass shutdown protest due to the outing of /u/chooter aka Victoria Taylor after her dismissal by CEO Ellen Pao) on retro gaming forums, revealing even more juicy details worthy of any schoolyard tall tale.

The console was supposedly given to analogueboy’s dad by some guy called Olaf, who asked him to throw it away along with some other junk. Analogueboy states he thinks ‘Olaf’ worked for Nintendo, but speculation has arisen that the mysterious ‘Olaf’ could be none other than Ólafur Jóhann Ólafsson, the original co-founder, president and chief executive officer of Sony Interactive Entertainment – adding even more credence to the story.

Aaaand in just three days, even with most of Reddit down over the period, it’s managed to generate a ton of internet drama. Accusations of fakery are being thrown back and forth, with retro gaming forums dividing over whether the console is real or an elaborate hoax.

The ‘casual name drop’ – as it’s being referred to – of ‘Olaf’ who used to work at nintendo is being held as grounds for both authenticity and chicanery. The just-too-perfect yellowing of the plastic – just like that on the old SNES that’s up in your attic right now – is both proof of realness and proof of trying to hard at fakeness.

Jealous collectors are posing as ex-sony workers and saying they worked on the system and it looked nothing like that, or real sony expats are debunking the obvious fabrication being presented, who can tell?

Analogueboy seems to have gone underground, and with reddit emerging from darkness after the /u/chooter strike, the conversation is starting up again, with some speculating that he’s either organising the sale of the device, or that he’s already planning to take the thing on the road and show it at conventions and give talks.

Edit: Another reddit user has posted a pic of himself with Analogueboy’s device along with “Not much doubt that it’s real” 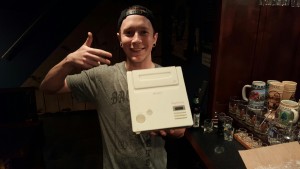