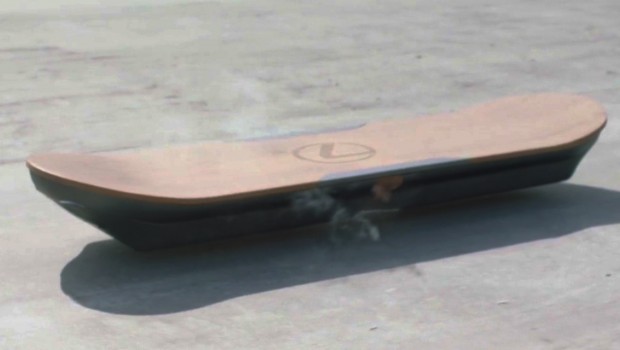 Finally we can retire the shitty Back to the Future memes and clickbait Facebook shares, the hoverboard is becoming a reality.

Lexus, Toyota Japan’s luxury vehicle arm, have unveiled a working prototype of a functional hoverboard. It’s real, it (allegedly) works, but it’s not available for sale… yet.

Using the same technology as the magnetic levitation trains already gliding around Japan and setting world speed records as they blast frictionlessly across the land of the rising sun, Lexus’s hoverboard is set for a worldwide reveal on October 21st, 2015 – the day Marty McFly, Doc and Jennifer went back to the future.

Using liquid nitrogen-cooled superconductors, magnets and other such high tech wizardry, the prototype isn’t as slim or confusingly day-glo 80’s styled as the device featured in the film, although the cooling mechanism does emit some cool looking nitrogen vapour from its undercarriage, likening the device more to an 80s sci-fi time machine than Marty’s iconic pink hoverboard.

The video Lexus has released gives little more than a fleeting glimpse of the device, and of course cuts away right at the moment the unknown skater protagonist begins to mount the beast for the first time, leaving us with nothing more than a hashtag and an inspirational quote to tide us over until October. Bastards!

Lexus will be testing the prototype in Barcelona this summer, hopefully they’ll reign in some pro-skaters for the testing phase to give this beast the shred it deserves for its first public outing.