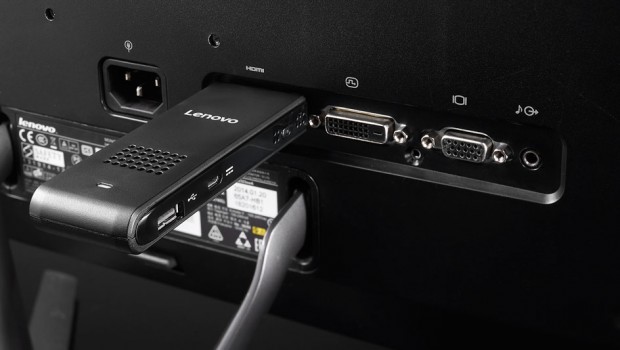 The introduction of the Intel Compute Stick (Intel’s $150 PC-on-a-stick that plugs into an HDMI socket, giving the user a full Windows 8 or 10 experience – albeit at tablet-level perfomance specs – when paired with any Modern monitor or TV display) late last year has opened the gates on a new market segment for computer manufacturers, and it was only a matter of time before competing devices started springing up.

Lenovo has announced their foray into the market, the IdeaCentre Stick 300.

With a similar form factor, slightly sleeker looks in traditional Lenovo style, and a small bump up in the processing power over the Intel Compute Stick – the Lenovo sports the Atom Z3735F 18GHz quad core processor, a speed increase over Intel’s native Atom Z3735F 1.3GHz in the Compute Stick – the Lenovo also comes in at a nicer price point, starting retail at $129USD when released in the Fall.

Lenovo’s volley in the PC-on-a-stick market also features 2GB of ram and 32GB storage space, a MicroSD slot, a MicroUSB slot, and Wifi and Bluetooth built in.

It will be interesting to see where this market goes in the next 12 months. While focused on portability, these devices still require an HDMI capable screen to plug in to – so great if you’re someone who regularly works from a hotel room, but maybe not so much if you need to work on the plane or from a cafe. Additionally, you’ll need to drag along a keyboard and mouse to use with the device as well, detracting a from that portability a bit.

However, you can’t argue with the price point, the PC-on-stick represents bang for the buck in spades. I’ve got a feeling these devices might find a niche as streaming media centre PCs, sort of a souped up, customizable Roku or Apple TV, rather than as a portable solution akin to a laptop or tablet.

Time will tell as more and more devices are release in this new market segment and people begin finding the best ways to put them to use.