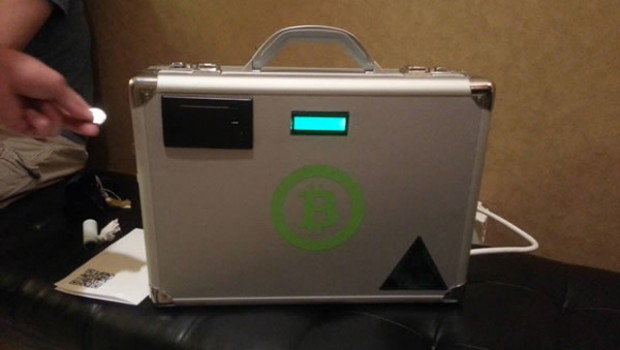 Bitcoins. I don’t have any, and chances are you don’t either. Chances are equally good that both you and I have no need to buy fake IDs or dank buds online, and these two factors are conditionally related. However, despite the fact that they haven’t really caught on in a huge way yet, Bitcoins are gaining some ground, with more and more stories circulating the tubes daily regarding their trials and tribulations.

The one that caught my eye today involved hackers at Defcon, a robotic diamond plate briefcase straight out of Roger Moore era Bond films, and of course, the Raspberry Pi.

It seems that those devilishly clever hackers have created a device, powered by our very favourite babby computer, that can convert your actual coins into internet play money.

It works thusly: the user dumps their pocket change into a slot in the briefcase, which is hoppered and counted. Software on the Raspberry Pi then communicates with Mt Gox (one of the Bitcoin exchanges) via 4G modem, and calculates how many fractions of a Bitcoin your coins are worth. The device then prints a receipt with a QR code on it, which you can then use to redeem for Bitcoins.

The device was aimed at creating a physical experience to ingratiate newcomers to the world of Bitcoins, a way to get people into the digital currency without having to make a large time or monetary investment.

It seems we are finding the Raspberry Pi in more and more interesting places, and with its bargain bin price and hacker friendly build ethos, I can’t really be surprised to see it mixed up with hackers and Bitcoins. I just hope it stays away from Silk Road and dem dank buds.